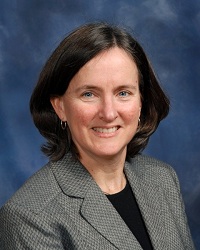 Linda McCrae grew up in Indianapolis, Indiana and graduated from Wesleyan University in Middletown, Connecticut. Following college, she spent three years living and working in Mexico City, Mexico through the Division of Overseas Ministries of the Christian Church (Disciples of Christ). Linda returned to the U.S. to pursue her Masters of Divinity at Union Theological Seminary in New York, New York. Her degree included studies at the Latin American Biblical Seminary in San Jose, Costa Rica. Following her graduation and ordination, Linda worked for several years for Global Ministries of the Disciples of Christ and the United Church of Christ, first as a program assistant for Latin America and the Caribbean and later as a missionary in a role of “pastoral accompaniment” with refugees in Guatemala.

Upon her return, Linda was called as Pastor of Wood Memorial Christian Church in Van Buren, Arkansas. Since 2002, she has served as Senior Pastor of Central Christian Church in downtown Indianapolis, where she gets great joy from being part of an inquisitive, diverse, justice-seeking community of faith. She also serves as a Field Education Supervisor at Christian Theological Seminary and is a member of the board of the Indianapolis Congregation Action Network (IndyCAN). She recently completed nine years of service on the board of directors for the Division of Overseas Ministries/Global Ministries, including two years as chair of the board.

Linda and her spouse, Beverly Knight, have a nine-year-old son, which keeps their lives filled with soccer games, hikes in the woods, Lego creations, and bedtime stories.

Register For This Lecture