The administrative offices of TransformingTheChurch.org are closed for the long holiday weekend but we would like to share this video with you in celebration of Independence Day. 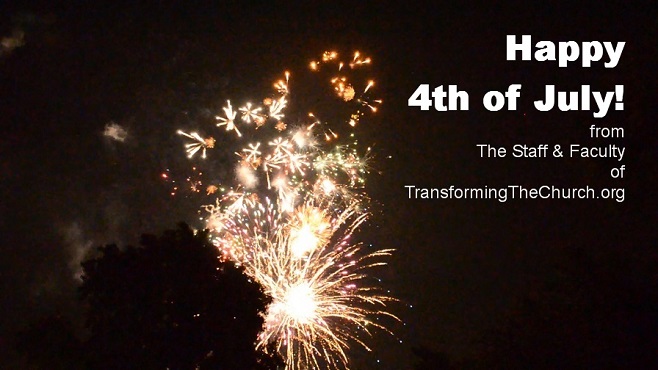 Bill Anderton shot a short 3-minute video as a "Happy 4th of July" greeting to our members of the Connected Community.

As a family tradition, Bill Anderton and his family participated in the 4th of July celebrations in the Township of Highland Park. Celebrations kick off with a very large community parade through both townships of Highland Park and University Park (collectively, the Park Cities). This year, the Anderton's bookended the parade. Nancy was at the head of the parade with Central Christian Church's float and it traditional annual tailgate-breakfast service project where the church serves breakfast to all of the other float crews (about 500 people) lined up since 6am for a 10am start of the parade (Bill and Nancy founded this service project for the church eight years ago.) The church then crews its own float at the head of the parade. At the same time, Bill and daughter Austin were literally "tail-end Charlies" closing out the parade with Highland Park High School's Highlander Band. Austin is a member of the Highland Band's Color Guard. Bill is one of the band's volunteer parent-photographers and marched with the band to document the event in stills and video. The township wanted the UIL Division-1 Highlander Band and Color Guard (also Division-1) to be the last thing people saw in the parade to end on a high note (yes, pun intended ;-). The band marched the route and played the Highland Park school fight song and "Your a Grand Old Flag" (by George M. Cohan.) Between Nancy and Bill and Austin were miles of home-made floats in this very large neighborhood parade with about 30,000 of their neighbors lining the parade route. A large percentage of the whole community shows up to either march in the parade or brings friends and family to watch the parade along its route. The parade ends in Goar Park for refreshment and fellowship before lunches (and naps, considering the 3am start of the day!) That night, much of the community re-gathers in the parks along Turtle Creek for picnics and to watch the great fireworks display put on by Dallas Country Club for its members and the Park Cities community. This video is the last 2-1/2 minutes of the 17-minute fireworks show. The day ends after midnight before everybody gets home and to bed. A very long day, but one filled with the joy of being community and celebrating the birthday of our nation together.

Happy 4th of July to everyone!