About Our 2012 Christmas Card

It is Bill Anderton's long-time tradition to make a short video production to serve as a Christmas card to be used on his websites during Christmastide. We are this year's host for his 2012 Christmas card.

The practice of making a video Christmas card began about six years ago as a way to say Merry Christmas to our visitors during the days immediately before and after Christmas.

Typically, these videos are short productions of only several minutes duration and are produced just for the fun of it. These videos use a variety of techniques. In the past, these techniques have included beautifully photographed Christmas scenes, video from Christmas mission projects, animated stills photographs of classical art, 2-D and 3-D animations.

The only common thread of these productions are, in Bill's tradition, that they all illustrate some aspect of Luke 2: 8-14.

Bill uses the King James Version only because these were the verses his mother used when he was a child:

8 And there were in the same country shepherds abiding in the field, keeping watch over their flock by night.
9 And, lo, the angel of the Lord came upon them, and the glory of the Lord shone round about them: and they were sore afraid.
10 And the angel said unto them, Fear not: for, behold, I bring you good tidings of great joy, which shall be to all people.
11 For unto you is born this day in the city of David a Saviour, which is Christ the Lord.
12 And this shall be a sign unto you; Ye shall find the babe wrapped in swaddling clothes, lying in a manger.
13 And suddenly there was with the angel a multitude of the heavenly host praising God, and saying,
14 Glory to God in the highest, and on earth peace, good will toward men.

This year's Christmas Card features a photo-realism-style 3-D animation of a wintery scene (appropriate for the weather in Dallas this Christmas) with a sound track composed of sound effects and the carol "What Child Is This" played on a child's simple music box:

What child is this, who, laid to rest,
On Mary's lap is sleeping?
Whom angels greet with anthems sweet,
While shepherds watch are keeping?

This, this is Christ the King,
Whom shepherds guard and angels sing:
Haste, haste to bring him laud,
The babe, the son of Mary.

Why lies he in such mean estate
Where ox and ass are feeding?
Good Christian, fear: for sinners here
The silent Word is pleading.

So bring him incense, gold, and myrrh,
Come, peasant, king, to own him.
The King of kings salvation brings,
Let loving hearts enthrone him.

These short Christmas productions also have a teaching mission. Bill uses them in his Internet workshops to show how creative productions and original content can be make be made on the very-limited budgets of small local churches. The production budget of each Christmas card is artifically limited to be just $100 to serve as a teaching example. Other than $100 of out-of-pocket expenses, the only other inputs to these productions are the creativity and "sweat" of Bill, his staff and his colleagues who contribute their labors to these productions.

The purpose of these exercises are to show webmasters of local churches that interesting and original content for church websites can be produced by almost anyone on just about any sized budget; all that is needed is a little creativity and the passon to do it!

Bill Anderton will be teaching these techniques here in both a free weekly video podcast in the Connected Community and a series of online workshops that will begin early in the new year.

From December 22 to December 27, this video was used in the main masthead of the home page of this website to greet our visitors (see the image below.) On December 27, the placement of the video was retired to this standalone page where it can now be seen. 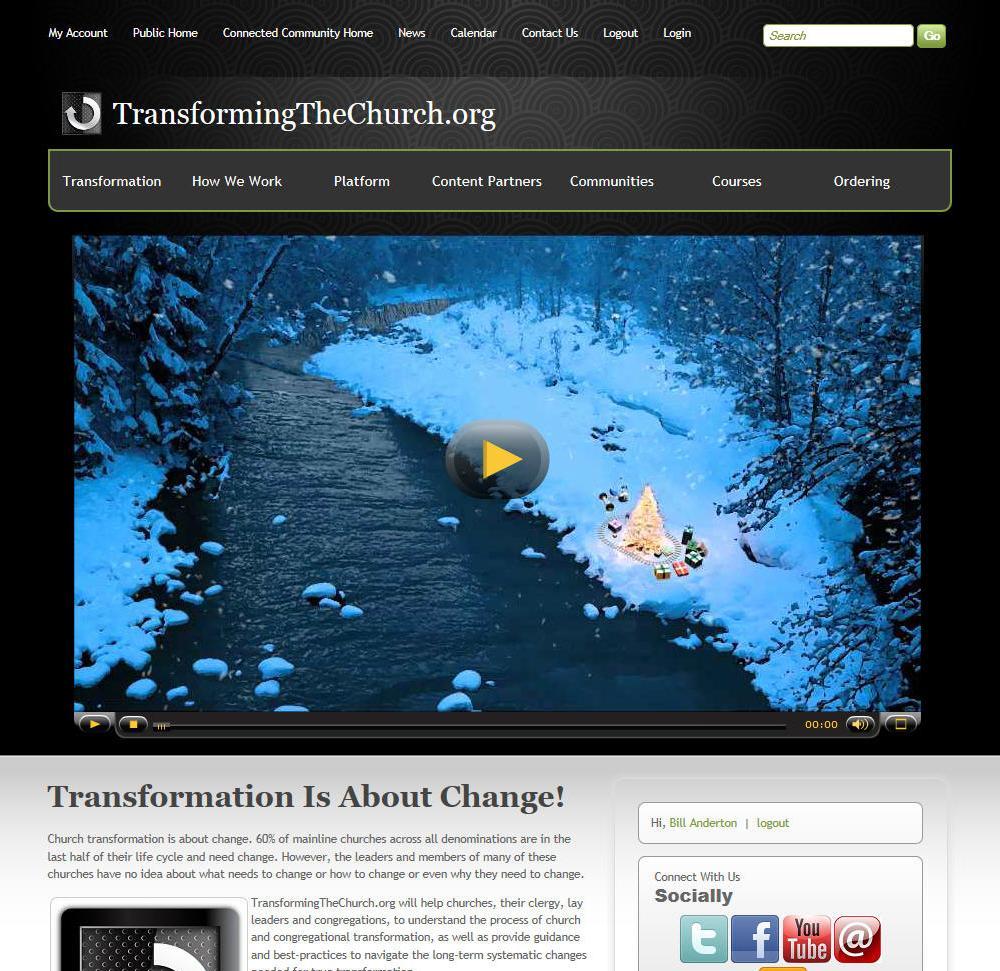