Our Featured Films In the Festival 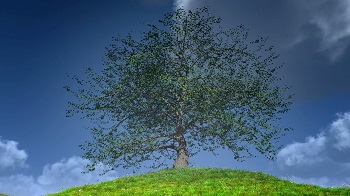 From Little Acorns is the only film in the festival that is not purely open source. However, it shares many of the same traits. The film was produced as a pro-bono project (a freebie), so it had no budget. Therefore, it shares the first common trait of all open source films of lacking any significant production funds and therefore having to do a lot with a little. All of the production expenses for this project were donated. The project was community-centric, and all of the creative work was performed by volunteers as a public service. This film uses both live action photography and photo-realistic 3-D animation to illustrate the old English idiom, "mighty oaks from little acorns grow." The general idea was that great things may come from small beginnings. 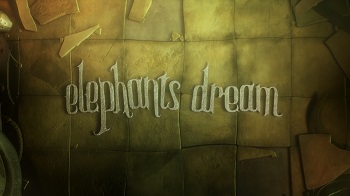 The film tells the story of Emo and Proog, two people with different visions of the surreal world in which they live. Viewers are taken on a journey through that world, full of strange mechanical birds, stunning technological vistas and machinery that seems to have a life of its own. 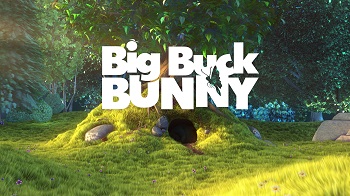 Big Buck Bunny is a comedy about a well-tempered rabbit “Big Buck”, who finds his day spoiled by the rude actions of the forest bullies, three rodents. In the typical 1950's cartoon tradition, Big Buck then prepares for the rodents a comical revenge.

In the film, we meet a lonely girl who is saved on a barren snowfield by a shaman. In the hut of the shaman she tells her life story; how she found a wounded baby dragon in a dilapidated city, and how a deep bond grows between them. When the little dragon is kidnaped violently by an adult dragon, she takes a long quest. After her visit to the shaman, she then undergoes a dramatic confrontation with the adult dragon.

The film’s premise is about a group of warriors and scientists, who gather at the “Oude Kerk” in Amsterdam to stage a crucial event from the past, in a desperate attempt to rescue the world from destructive robots.

We're not showing this film because it is not yet released, but we mention it because of its significance.

"Project Gooseberry" is the code name for Blender Foundation's fifth open movie project, Cosmos Laundromat, which is currently in production. Beginning with a 15-minute pilot (to be released summer 2015), the ultimate goal is to produce the world's first feature-length open-production animated film. A full-length feature film as open source project has never been attempted before.

Cosmos Laundromat tells the tale of a suicidal sheep named Franck who meets two people who just might save him: a mysterious man named Victor, who offers him a device that will allow him to experience many different lives, and Tara, a restless young lady on her own adventure of many lifetimes.

At the SXSW conference in March 2014, Blender Institute launched a large crowd-funding effort for this film. This feature-length film will be made by 12 teams from all over the world, collaborating online using the newly launched Blender Cloud service.

People who want to support the project can choose to split their contribution into small monthly payments, which then gives them access to the same Blender Cloud. This way the supporters will be able to watch and share the progress of the animation teams, and even participate in it.

Blender Institute’s main purpose is to help bring open source 3D creation up to a higher level of support. The heavy demands of feature animation teams will define the work for 15 full-time developers. Targets will include asset and project management, new hair and cloth simulation, advanced animation/simulation dependency handling, and work on rendering and compositing.

As usual, all the movie production data will be available under open source and Creative Commons licenses – including sound effects, mix and music.

French animation director Mathieu Auvray (Babioles) will develop the script, together with Esther Wouda (Sintel). Both will work in Amsterdam with producer Ton Roosendaal, in the studio of Blender Institute – where central production coordination and development happens as well. The story is about Michel the sheep, who longs to get a more interesting life. It will be a funny, absurdist and adventurous love story.

In total 70-80 people are expected to work for 18 months on the Gooseberry project, in 12 different countries on nearly every continent.

The Blender Foundation receives no fees for displaying their films. If you enjoyed them, please consider making a donation directly to the Blender Foundation. Any donation, even a small one, will help them achieve their goal. If you are interested, click here for details.