Elephants Dream premiered on March 24, 2006. It is a computer-generated animated short subject of 10:56 (mm:ss) duration.

Elephants Dream was the world’s first and widely recognized open movie “Elephants Dream”. Not only was the film entirely created using open source tools, the end-result and all of the assets as used in the studio were published under an open license, the Creative Commons Attribute.

Elephants Dream took seven artists and animators eight months to complete. Although led from the Netherlands, the production teams was located around the world.

The film was directed by Bassam Kurdali, produced by Ton Roosendaal and written by Pepijn Zwanenberg. 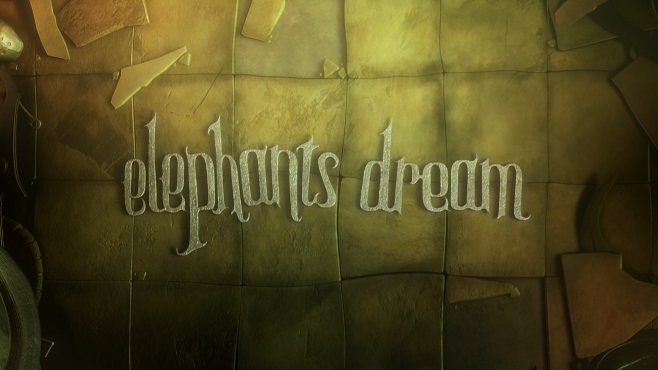 The project was jointly funded by the Blender Foundation and the Netherlands Media Art Institute. The reported budget for the film was 120,000 euros. The Blender Foundation raised much of their funding by selling pre-orders of the DVD of the film. Everyone who pre-ordered has his or her name listed in the film's credits.

The film's was the first "open-source film." The finished film and all of its work product and production files was released under the Creative Commons Attribution license. Anyone is welcomed to learn from it and use it anyway they wish as long as attribution is provided.

The 3D animated short ‘Elephants Dream’ will today be released as a free and public download. This is the final stage of a successfully completed Open Movie project which has been community-financed, using only Open Source tools, and opening up the movie itself as well as the entire studio database for everyone to re-use and learn from. The movie and production files are licensed as “Creative Commons Attribution 2.5″, which only requires a proper crediting for public screening, re-using and distribution.

In the past weeks, the donating sponsors have received the dual DVD set of this project in their mailbox. This DVD set remains for sale via the blender.org e-shop as support product for future Open Movie projects. The Blender Foundation is committed to start working on similar projects soon.

The movie files and download mirrors can be accessed here: orange.blender.org/download/

Elephants Dream is the culmination of the Orange Open Movie Project, produced by the Blender Foundation and the Netherlands Media Art Institute. The project was conceived to help develop and establish the capabilities of the Blender 3D open source tool for the creation of cinema quality animation.

The film tells the story of Emo and Proog, two people with different visions of the surreal world in which they live. Viewers are taken on a journey through that world, full of strange mechanical birds, stunning technological vistas and machinery that seems to have a life of its own.

‘Elephants Dream’ features the voice talents of renowned Dutch movie actors Tygo Gernandt and Cas Jansen, as well as an original score by German composer Jan Morgenstern. The short brought together the talents of a team of artists from countries as diverse as Syria, Germany, Australia, Finland, and the Netherlands. In addition to the performances of the cast and creative efforts of the lead artists, Elephants Dream has had the assistance of hundreds of individuals across the world who contributed a variety of work such as programming additional functionality for Blender, creating textures used in some of the scenes, and providing international translations for the DVD release.

The files have been released on two DVDs with the movie in PAL, NTSC and HD formats, a making-of documentary, and all of the studio files. The DVDs were shipped in early May 2006. As promised, shortly after, the movie and database of source material is now available for public download as well.

The Making of Elephants Dream